Built in the year 1988 the main clubhouse of Emirates Golf Club was a renowned golf course in the Middle Eastern region. Today, it boasts of some of the finest golf courses in the world. The recent upgrade was completed in 2011. The said upgrade was headed by architectural firm Brewer Smith Brewer Gulf company. Situated at the Emirates Hill, Near Nakheel Metro has developed a reputation among some of the golfing greats all over the world.

The Emirates Golf Club with its stunning 18 hole course worth visiting even if you don’t engage in Dubai’s obsession with the pitch ‘n’ putt. The impeccable architectures are a reminiscent of Australia’s Sydney Opera House. It comprises of three major courses– The Majlis Course, Dubai Creek & Yacht Club and the Par 3 course.

The Majlis Course is the region’s first grass course and derives its name from the Arabic word Majlis which means “meeting place”. It literally accommodates a Majlis which stands erected between the holes 8th and 9th. The course also offers the company of many native flora and fauna species.


The iconic Majlis course has been a monumental spot in the golf facility since 1988. However, it gained worldwide recognition after the 1989 European Tour Event.

The facility has been home to many Inter-Arab tournaments since its completion. But it gained international acclaim with the Dubai Desert Classic, and today tournaments that are held at the Emirates Golf Club are being broadcast live on TV reaching millions and millions of people all across the world. And also reach a huge number of live audience who come to the city specifically for golf watching.

The Omega Dubai Desert Classic was inaugurated in 1989. It is an annual pro golf tournament which is held on the Majlis Course with the exception of twice when it was held at the Dubai Creek Golf & Yacht Club.

Debuted in the year 2006 Omega Dubai Ladies Masters is the first exclusively for women tournament to ever be held in the region of Middle East. It is also held at the Majlis course.

You can sign up for a club membership to a Dubai Golf membership, which let you use a whole lot of facilities which both the prominent golf clubs have to offer. The membership will also let you have access to the golf courses at Emirates Golf Club and Dubai Creek Golf & Yacht Club.

Recently, they have introduced golf memberships for both club categories — Weekday and Corporate.

The Emirates Golf Club is beyond just being a golf club, it’s a premiere destination for luxury seekers for all things indulgence. Besides the appealing golf courses, they offer a wide range of fine dining eateries, snack worthy places, bars and more.

You can swim in the stellar pool, get fit at the gyming facilities, play a game of tennis at their courts, explore the entire facility on top notch golf carts, and have a pampering session at SensAsia Urban Spa.

So, are you ready to spend a luxurious day at the Emirates Golf Club? 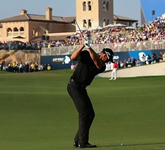